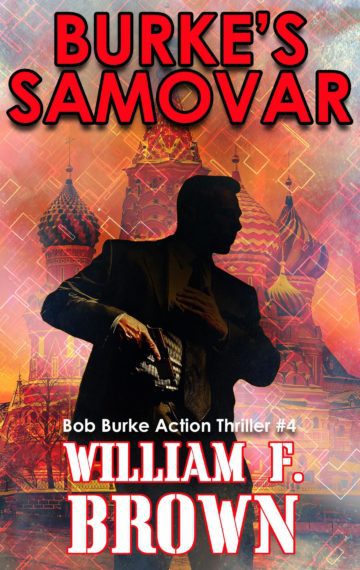 Listen to a sample
$5.99Buy NowRead A SampleSee The ReviewsSee The Full Series

Bullets, Bombs, and Mayhem! Bob Burke is back for # 4! This time he’s tusslin’ with the Russian Mob and ‘The Czar’ himself in the Kremlin!

When the Russian Mafia in Brighton Beach steals his company’s Army software contract, blows up his office building in Chicago, and attacks Sherwood Forrest, enough is enough! After dustups with ISIS terrorists, the New York Genovese and Luchese Mafia families in an Atlantic City casino, and a shootout with the Chicago DiGrigoria mob in a Forrest Preserve woods, all this former Army sniper,  Ranger, and Delta Force commander wanted was to go back to his North Carolina farm, kick back, and enjoy life. But that can wait. Time to take break up their operation in Brooklyn, take their ‘lunch money,’ kick some butt, and make a house call on their boss in his Dacha back in Moscow.

With the help of the Merry Men, a Russian Army Colonel, Sasha the Mad Russian, sniper rifles, of course, and plenty of plastic explosive, it is Game On! Like Burke’s War, Burke’s Gamble, and Burke’s Revenge the action is nonstop! It’s time for some serious payback and a taste of revenge. Undersized, underestimated, and now a telecommunications company executive, he is often dismissed as simply the “phone guy,” but as his former Delta sergeants will attest, whether he’s carrying a .50-caliber Barrett sniper rifle, a tactical knife, or just his bare hands, he is one of the most lethal killing machines the US Government ever produced.

If you like a fast-paced action-adventure suspense novel, put this Delta Force thriller in your Cart. It’s another military best seller from the author of The Undertaker, Amongst My Enemies, Thursday at Noon, Aim True, My Brothers, Winner Lose All, and The Cold War Trilogy. Whether you’re looking for a good beach book, something to get you through a long plane flight, or something to take the chill off a cold winter night, grab a copy and see for yourself. Enjoy!